Baingan ka Bharta is a smoky Indian eggplant dish that’s full of flavor and surprisingly easy to make at home! If you like eggplants and Indian food, this recipe is definitely for you. This spiced and smoky Baingan ka Bharta is bangin’…. yup, I went there. I couldn’t resist… the play on words was way too tempting. It’s true though – this recipe is fabulously tasty.

When you think of “Indian cuisine” – Baingan ka Bharta is high on the list. While the recipe varies by region, many Indian restaurants tend to serve Punjabi Baigan ka Bharta, one of the most popular ways of making this dish. Baingan means eggplant and Bharta is a mixture of mashed vegetables. Combine the two and you’ve got an Indian mashed eggplant dish. It tastes better than it sounds.

To make this popular Punjabi dish, you first have to “smoke” your eggplants. Some old school folks (like my parents) do this by turning on the stove and cooking the eggplant right over the flame. You can certainly do this over a direct flame or on a grill – just cook until the skin is nice and charred. I prefer using my oven (less chance of me burning my fingers). Heat your oven to 500 degrees, make a few slits in your eggplant and rub it with oil. Bake for 40 minutes, flipping it over halfway then broil for five minutes. See step 3? That’s what you get when you peel the eggplant. Doing this infuses the eggplant with a wonderful smoky flavor. Mix the smoky eggplant with the spiced tomato masala and eat it with Paleo Chapati or Paleo Naan. It’s also great served over basmati rice or spaghetti squash. Enjoy this tasty, smoky and savory baingan ka bharta as a side dish or as your main meal! If you like eggplant, you will love this dish 🙂 This is one of the many delicious recipes in my eBook, South Asian Persuasion so if you’re looking for healthy paleo-friendly recipes with a lot of flavor, then be sure to check it out! 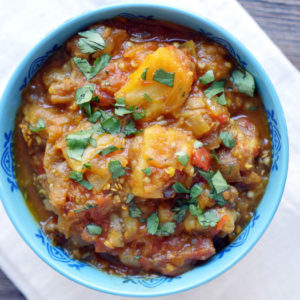