Chicken vindaloo, a popular Goan curry, is known for being tangy, flavorful, and spicy. With this instant pot recipe + my onion masala shortcut, you can have a restaurant-worthy dish on your plate in no time at all.

Vindaloo has a rep for being “the spiciest Indian curry ever,” but oh my gosh, that is so not true… and it’s also kind of silly. You can transform any Indian dish into a spicy curry by adding more chilies or cayenne/red chili. Vindaloo is actually really flavorful – even without the heat. Spices like cardamom and cinnamon add a sweet and herbal/floral flavor and aroma to the dish. And then there’s the vinegar, which gives this curry a unique pickle-like flavor.

Now all of that said, if you prefer a super spicy vindaloo (like my husband), you can easily turn this into a dish that’ll make your eyes water. If you’re like me and prefer a flavorful but milder curry, you can have that too! Yes, yes. You can have your vindaloo and eat it too.

“This is OMG delicious!!!! So easy. Love having onion masala in the freezer. Thanks Ashley!”

A Goan dish with Portguese origins

Vindaloo is an Indian (Goan) dish of Portuguese origin. When the Portuguese got to India in the 15th century and colonized Goa (which was actually still a colony up until the 1960s…), they brought a dish with them called carne vinha d’alhos which translates to pork cooked in garlic and wine. That dish was doctored up with Indian spices and ingredients, and the name was shortened to vindaloo.

After trying Portuguese cuisine during a trip to Portugal a couple of years ago, I’m pretty confident in saying that the well-spiced, spicy vindaloo we know and love… likely tastes nothing like the original carne vinha d’alhos, which I have to assume (albeit based on my very limited experience with authentic Portuguese cuisine) is a milder dish.

If you’re looking for a more “authentic” vindaloo that’s made with pork, you’ll want to try this pork vindaloo.

What if I want to use a different type of meat?

I already have a couple of vindaloo recipes on the blog: pork vindaloo and a more everyday recipe for ground meat vindaloo with potatoes. Eventually, I’ll share a meatless version too (maybe something along the lines of my butter chickpeas, but with vindaloo sauce? Oh! Or maybe a jackfruit version? Yes! That! Thinking of ideas as I type! I really need more time in the day to recipe test – if someone makes a meatless version before me, please tell me!).

Can I add potatoes?

I haven’t tried adding potatoes to this particular curry but don’t see why not. I have a chicken and potato curry on the blog, and it calls for the same cook time as this vindaloo. The only thing with this recipe is that you may need to adjust the spices at the end and possibly add an extra bit of onion masala if needed.

I know some people think vindaloo should have potatoes because vindaloo contains the word ‘aloo,’ which means potatoes in Hindi. The fact that ‘aloo’ is in the name is just a coincidence. Potatoes are nice for stretching out a meal, and they also cut some of the heat, so if you want to try, go for it. I’d cut them in half and toss ’em in.

Serve this chicken vindaloo with jeera rice and a side dish like aloo beans or arbi. 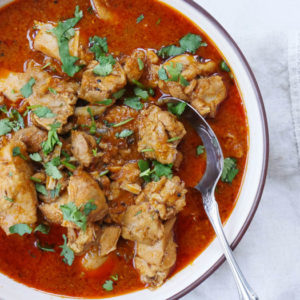