This freezing cold weather has me craving all sorts of comfort food lately. And today’s recipe just so happens to be the coziest breakfast dish of them all: paleo sausage gravy and biscuits.

Not only is this recipe gluten-free, dairy-free, and paleo-friendly, it’s also super simple to make! You can make the gravy in just minutes on the stovetop while the biscuits bake in the oven. And the biscuits are really easy to make too – they’re my popular 4-ingredient biscuits. This is a meal that you can make at the last minute on a weekend morning as long as you’ve got all of the ingredients handy of course.

“Fixed this for brunch for my husband and me today. This was great! The only thing I will do differently next time is to get the biscuits in the oven first then make the gravy. I think those were the best biscuits made with coconut flour I have made!”

Before we moved to Pittsburgh, Roby and I lived in Morgantown, West Virginia for a few years. There was a diner near our house that we’d go to occasionally, mainly because Roby loved eating their buttermilk biscuits smothered in sausage gravy. Unfortunately, the only thing on their entire menu that I could eat: eggs. And while eggs are good, they don’t really hold a candle to biscuits and gravy.

Now I can eat biscuits and gravy as much as I want to and as often as I’d like. This meal is darn delicious. My husband loves this gravy too – and that’s coming from a guy who has had the real thing many times before.

One thing I will say is to manage your expectations when it comes to my the coconut flour biscuits. They are really tasty but they do not taste like buttermilk biscuits (because they are made out of dried coconut meat…). BUT they are really buttery and crumbly and good. If you’ve been following a paleo diet then you will love the biscuits! If you’ve never tried a coconut flour biscuit before, then well… you may not.

If biscuits aren’t your thing (is not liking biscuits a thing?) then you can serve this sausage gravy over fried potatoes or sweet potatoes – or even a slice of your favorite toasted bread. Think of this gravy as a magic sauce that’ll taste good over pretty much anything.

I know there’s quite a bit of coconut in this recipe: the biscuits call for coconut flour and the gravy calls for coconut milk. BUT trust me, you won’t be able to taste any coconut.

Make this for a special weekend breakfast or brunch. If you’re wondering what else to make to go along with this, try serving it with my cinnamon coffee cake and buttered chai. 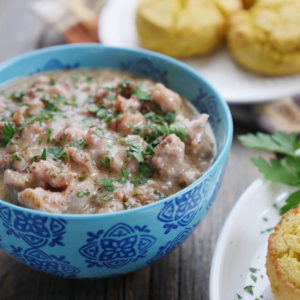 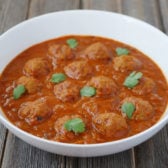 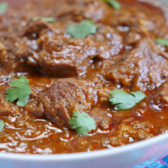 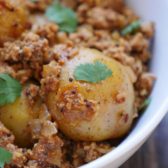