This recipe calls for a stovetop pressure cooker – if you are looking for the instant pot version of this recipe, please visit this instant pot kerala beef fry post! Yep, you read that right. Fried beef. It is quite fabulous. This fried beef recipe is made with beef, coconut bits, curry leaves and spices galore. It can be as spicy or as mild as you like. This recipe is actually a Christian Keralite dish called Erachi Ularthiyathu which means: beef fry. For Christians in India, especially in Kerala, beef is a staple and this particular recipe is considered a special dish by many – my hubby included.

There are a few steps to this dish, but the time it takes to make this is well worth it. Because it does take a bit of time, I usually make a large quantity and freeze half. For this recipe, I use two pounds of stew meat. I cut the stew meat into smaller pieces so that the beef gets coated with masala.

The first step in making this recipe is to gather the ingredients you need to marinate the beef. There’s a list of ingredients under “marinate” below – put them all in a plastic bag and then dump in the beef. Mix it all up and put it in the fridge for an hour or so.

Once the beef is done marinating, add everything in the bag to a pressure cooker along with ¼ cup water. The meat releases water as it cooks so you don’t need to add much. After 3-4 whistles, remove the meat from the hot stovetop and let it cool down before opening your cooker.

Begin the sauteing portion of your recipe. This is where you’ll make what’s called a tadka – which is basically an Indian method of tempering where you fry spices in oil. So, you’ll add oil to a pan and then add all the ingredients listed under “sauteing.”

Once the onions turn a nice golden brown, move the beef and gravy from the pressure cooker to your skillet. Saute until all the water is gone and the fried beef is nice and brown. You might need to add more oil if the masala coating starts to stick to the pan.

This dish tastes even better the next day… and the day after that, if you can keep it around that long. 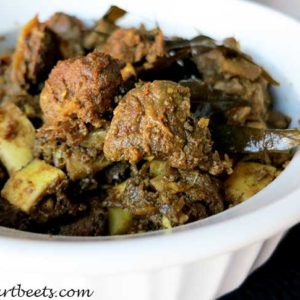