Just look at that golden crust! These spicy tuna pumpkin patties are first baked and then shallow fried in ghee. They make for the perfect snack or meal. You can serve these patties on top of some greens or stuff ’em in a bun to make tasty tuna burgers (try them with my paleo hamburger buns OR paleo naan).

I know, I know. It’s pumpkin season and while it seems like every blogger is sharing recipes for pumpkin desserts… I’m sitting here making you this savory pumpkin recipe. And this, just two days after sharing a recipe for savory paleo pumpkin chili! I hope you still love me!

This recipe makes over a dozen tuna patties – I like making a large batch and freezing extras. I always shallow fry the patties first, then freeze them. That way, all I have to do is reheat them in a skillet!

Want to try some of my other savory pumpkin recipes?

If you decide to freeze these, I suggest shallow frying them first. Then freeze them on a sheet pan individually before putting them in a ziplock bag – this way, they don’t stick together.
Did you make this recipe?Tag @myheartbeets on Instagram and hashtag it #myheartbeets! 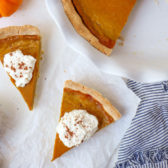 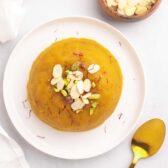